I have a love-hate relationship with chicken wings and it all developed in college.  The best wings place is Taco Mac in Atlanta and I spent many a night there in college.  We would always arrive super hungry and think it was a great idea to split a 50 wing plate between three people.  About 10 wings in we would all look at each other in this sleepy wing-induced coma and say “I’m soooo full”.  But you had to finish them.  Because you were in college and if you took those chicken wings to go who knows where they would end up.  I had a roommate in college (hi JB!) that would eat anything in our fridge if you didn’t write your name on it.  He would call me while I was in class to ask if I was going to eat something that I had marked with my name on it.  But he was a great roommate so I won’t say anything else.  Except that one time we went to a fast food place on campus and he didn’t want to buy anything so he brought a Hot Pocket from our house.  Okay I’m done.

So every time I made this chicken wing mistake I would swear off of them for about a month and then forget about it.  I imagine it’s like a woman having a painful labor, swearing to never have another kid, and then two years later being like, “It wasn’t that bad, was it?”.  Then, about two years ago there was the ultimate chicken wing incident.  Taylor and I were at a tennis tournament over night for the high school team he coached.  They all wanted Taco Mac for dinner.  There was something about sitting in the lobby of the Holiday Inn surrounded by mountains of chicken wings watching ten teenage boys scarf them down that just made me really not want to eat them ever again.

But I caved.  I blame the Super Bowl.  But this time I did not have regrets.  Probably because we only had 8 wings each. 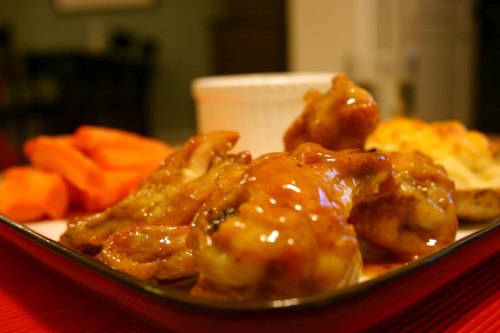 sauce of some kind – I was going to make buffalo sauce but all the recipes I saw included a stick of butter.  So we used Salt Lick barbeque sauce.

1. Dry the wings with paper towels and toss with baking power and salt.  Place on an aluminum-lined baking sheet and put in fridge for 8 – 18 hours.

2. Preheat the oven to 450 degrees. Put wings in the oven for 20 minutes, turn them, then bake for another 20 minutes.

3.  Toss with sauce and serve.

We also had twice baked potatoes and they were terrific.

I then proceeded to slip into a wing/potato-induced coma as I expressed my disgust at the majority of the Super Bowl commercials while simultaneously trying to convince Taylor that we should watch the Puppy Bowl instead.