Rain Keeps Falling on My Head

We have learned that when it rains in Texas, it will do so for at least a 36-hour period.  It started raining at some point on Friday night and didn’t stop until Sunday around noon.  Our apartment already doesn’t get much light since we are on the ground floor and face a courtyard.  Combine that with the curtains we recently put up in our bedroom and the rain and you will understand why our entire weekend involved us moving around in the apartment like zombies.  More than once, one of us would go into our bedroom to get something and, five minutes later, the other person would find them inexplicably sprawled out on the bed.  Instead of waking that person up, the other person would simply join them.  About half an hour later we would say, “we should really get up”.  But by that point we would have a cat on us and you all know that YOU CAN’T DISTURB A CAT.  So many things I had to do in high school for my mother because she had “a cat in her lap”.  So many things.

While in Connecticut we went to the Mystic aquarium which was really neat because it was half outside and half inside.

They had a lot of animals which I was surprised by as Mystic is not a large town. One of the best parts of our visit happened when we first arrived and went to the beluga whale tank. Two of the whales were nipping at each other and a kid said “Oh look mommy, the whale is biting the other and playing with him!” Under my breath I said to Taylor, “You know what that biting really means”. Not too long after that an incredibly long beluga whale penis made an appearance.  All the families around us got very quiet as our entire group broke out laughing.  They were all trying to look anywhere in the tank besides the penis which was very difficult as it was very in your face.  You guys, I don’t want to live in a world where it is not okay to acknowledge that there is a beluga whale penis and that it is funny.  So I continued to laugh for a very long time.

Taylor and I were in Connecticut this past weekend for a wedding.  Despite his family living just outside of Hartford, I haven’t really seen too much of it.  Our attempt to go to the newly renovated science museum in downtown Hartford was foiled when we showed up on Friday to be greeted by a sign that said they were cleaning all week.  That is some intense cleaning.  So Taylor and I went with his mom and sister to Mark Twain’s house just down the street.

Mark Twain did not fashion a judgmental self-portrait out of LEGOs; this was in the main lobby outside of his house.  There was some sort of police ceremony going on in the lobby area when we arrived.  I have never been arrested but something about seeing that many cops at the same time was slightly terrifying.  We left for our tour shortly after arriving, but not before Taylor’s sister touched something SHE WASN’T SUPPOSED TO TOUCH.  I waited for the cops to arrest her but it didn’t happen.  They were probably too busy eating doughnuts (HAHA GET IT?). 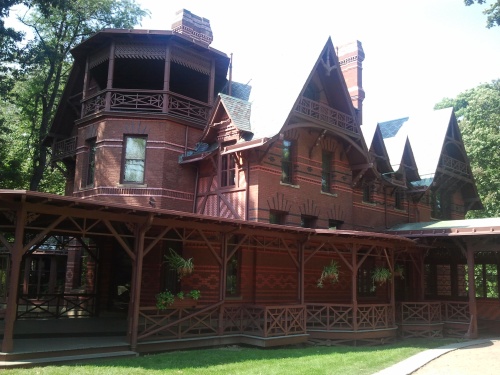 The house was beautiful inside and out but we were not allowed to take pictures indoors so you will have to use your imagination (or you can see other pictures here).  Some of the wallpaper was hand-painted, commissioned work to Louis Comfort Tiffany before he became famous for his lamps.  My favorite room was the library which had bookshelves along all the walls.  It was a beautiful house and only cost them $46,000 when they built it.  Price inflation has ruined everything.

At the Hartford airport on the way back, we saw a LEGO rendition of the house.  I’m beginning to think Mark Twain really loved LEGOs.

My favorite part was the message Mark Twain left from beyond the grave. 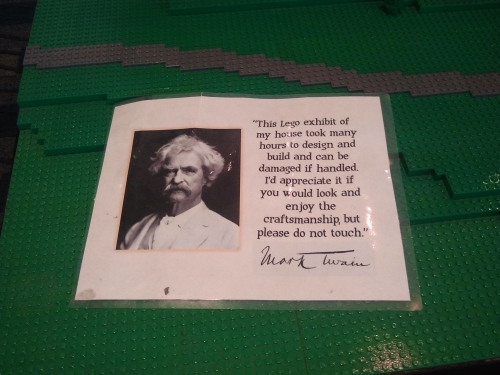 What a literary master.

This delay in posting is a result of Taylor and I recovering from the amazing weekend we had in Park City, Utah.  I’m going to skip over anything we did related to food and save that for Friday.  I will say that it was the most I have eaten in a long time but it was all worth it.  It’s not like when I’m at the beach and I eat an entire box of Cheez-Its.  Delicious?  Yes.  The best thing I could fill my stomach with?  No.

Anyways, Park City.  A cute little ski town just outside of Salt Lake City that actually has things going on not in the wintertime.  So we land in Salt Lake and it’s immediately not like Dallas.

What are those things in the background?  Also, the weather was awesome.  I actually got cold on the first night!  I don’t even know what that means anymore.

The hotel was amazing.  We were in a three room suite with some of the other groomsmen/college friends/fraternity brothers who graciously let us have the room with the attached bath that had a bath tub with a faucet coming out of the ceiling.  I believe it was their way of saying “thank you” for putting up with the gross girl’s bathroom at the fraternity.  I will say that as cool as the bathroom was, we realized the bath tub was not practical.  Water goes everywhere as it comes out of the ceiling and splashes on the bottom of the tub.  There were also square, very shallow sinks that looked cool but when you spit toothpaste into it, it just kind of sits there.  So not only was the hotel awesome, it taught us what fancy amenities aren’t practical for our future home.  Thanks, Sky Lodge!

The whole intent of our trip was to see our friend from college, Matt, get married.  Also, Taylor, as an usher, had to ush people around.  In order to get to the awesome wedding location we had to take a ski lift.  This was less terrifying in a dress and heels than on a snowboard.

The view was spectacular.

And it was there that Matty and Peter got married.  I most definitely did not cry and use three tissues in a 15 minute period.

Then we were informed that, in order to get down, we must take the alpine slide.  Some people in dresses were not too happy about that but I figured this was probably the only time in my life that I would take a slide down a mountain in a fancy dress.

Surprisingly, that is not when my dress got dirty.  That was later when red wine was spilled on it multiple times.

Those cocktails in our hands?  They made us excellent dancers after dinner.  Matt and Peter made the entire weekend a great adventure and we were so happy to be a part of it.

On Friday afternoon, my coworker walked up and asked what Taylor and I were doing on Saturday.  As you know, we have very busy social lives so I mumbled something about how we were thinking of putting up a curtain in our room.  He handed me two tickets and a parking pass to the preseason Cowboys versus Rams game.  So the curtain will have to wait.  Within a month of us first moving here, I was able to go to a preseason game with one of my coworkers but this was a first for Taylor.  The seats were up pretty high but that didn’t matter with the giant TV in front of us.

If you have a fear of heights or just a general fear of plummeting to your death while walking down a flight of stairs, these are not the seats for you.  The vastness of the stadium provided for ample people-watching, something that I am incapable of stopping myself from doing.  I tend to watch people and then make comments to Taylor assuming he knows exactly who I’m talking about which never works out.

Me: Oh man, that drunk lady almost dumped her whole beer on that kid.

He is so patient with me.

This weekend involved a lot of nothing because we live two blocks away from SMU which started fall classes on Monday.  That means people moving in all over the place, including our apartment, so we stayed inside.  Also, around 4:00 in the afternoon on Saturday we realized it was very very dark outside.  It then proceeded to rain for about 12 hours.  Don’t worry, the rats survived.

The talk of classes starting always spurs our nostalgia for Georgia Tech.  The excitement of that first school year.  Everyone just hanging out on a Tuesday afternoon because you can.  Ordering take-out at 2:00 in the morning.  Your mom saying to the cashier “That’s disgusting” when your books for the semester ring up to $560 (a favorite moment of mine).  I look back on it and think how fun it would be to go back but I think what we really miss is the freedom.  It’s a time where you have so much independence but you don’t have to take on all adult responsibilities yet, just a couple at a time.  Taylor and I agree that we didn’t fully appreciate how unique and awesome that lifestyle was until after we were out of college.  I guess I could still order take-out at 2:00 in the morning but I have IBS and there’s work to do in the morning, damn it!

On Saturday I went to brunch in an area of Dallas called Oak Cliff.  It is an older area of town that has a bunch of great restaurants and some shops but is about a 20 minute drive so we don’t get over there too often.  Well after Taylor’s half marathon on Sunday we ended up back over there for brunch.  And despite his tired little leggies, I convinced him to walk around to a couple of the shops with me.  Below are a couple of the places we visited.

Oddfellow’s: A very popular brunch location that has tons of brunch options for pretty cheap.  Any place that offers cheese grits is good to me.

Tillman’s: Where we went to brunch on Sunday after the wait at Oddfellow’s was an hour and a half.  Yes, that place is so good I was willing to go there two days in a row.  Tillman’s was a good consolation prize though – the creamer for my coffee came out in a tiny little ceramic cow.  Which I saw later that day on the Bed Bath and Beyond site.

Dirt: A florist that specializes in succulents – a type of water-retaining plant that easily adapts to arid climates (you might find this exact phrase on Wikipedia).  You only have to water it once a month so we think it will be a good start for us.

Green Pet: The cat section for the pet store was small but what they had was good stuff.  I bought Luna some very crinkly sounding balls for only 99 cents – a small price to pay to see her eyes dilate immediately upon hearing the crinkling.

Dude, Sweet Chocolate: This is a relatively new local chocolate shop.  They have a lot of very interesting fudge and toffee flavors – the next one we plan on trying is the Albatross which is dark chocolate fudge with blue cheese and sea salt.  Some of you probably think that sounds disgusting but it is apparently very popular so it must taste good.  I bought Taylor some fudge with coffee beans in it for him to have after his half marathon.  He was kind enough to share.

Do you really think I have any fudge left for a picture?

Messing With Texas
Create a free website or blog at WordPress.com.